The disorder that makes people fear the idea of sex or any sexual behavior is known as genophobia. The concern of people suffering from genophobia is not just sexual intercourse, but the whole idea of any taking sexual attempts, or getting involved in one makes them anxious about it. It can be very difficult to cope with the issue when one is married or is involved in a relationship with another person. Most people suffering from this disorder even avoid relationships as it makes them terrified of the sexual intimacy. 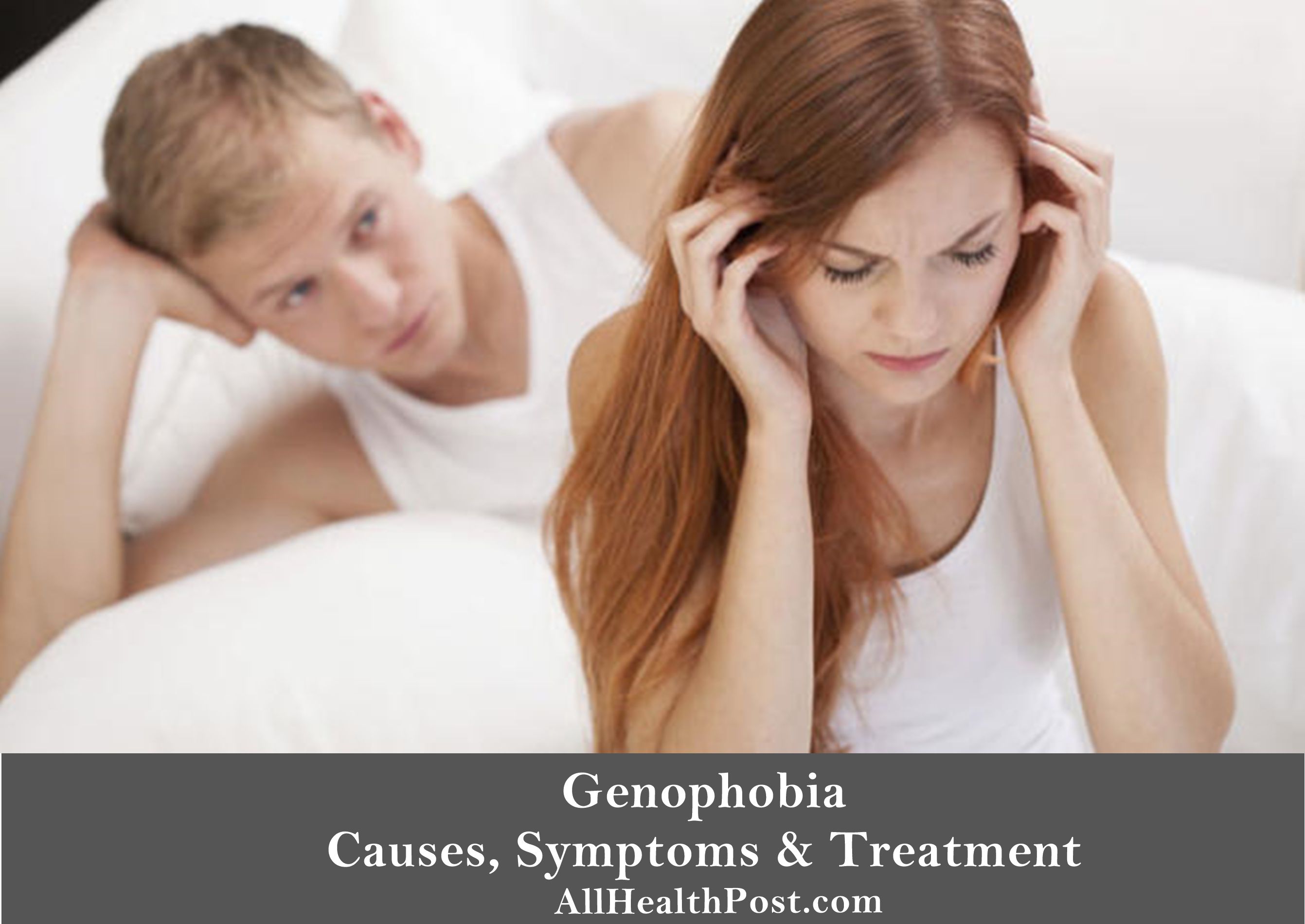 There are different methods to treat genophobia like there are methods for treating other phobias and generally includes a couple of medications and therapies to help them overcome their fear. A person might be suffering from this condition due to physical as well as mental reasons. The physical symptoms that could make intercourse challenging for the person could result from fear or maybe because the person might have experienced traumatizing sexual abuse or assaults in the past which could have triggered the development of the phobia. The specific reason for the fear could be anything and the patient has to resort to therapies from psychiatrists, professional therapists, etc. to overcome their phobia.

Genophobia, as mentioned above, is the fear of the idea of having any sexual intimacy or sexual intercourse with another person. It is also known as coitophobia and the phobia is known for causing fear in the mind of the people suffering from it which is similar to panic attacks. Suffering from this phobia can affect the individual greatly by any attempts of sexual contact or even the idea of it could trigger the fear in them. This fear can lead to difficulties in romantic relationships in the person’s life and they might also prefer staying away from any such involvements to avoid such possibilities. The fear can also induce embarrassment in the person or make them feel ashamed before other people for their own fear and thus, they may end up feeling lonely.

The development of genophobia could have many different reasons associated with it. Individuals go through the phobia commonly when they have faced incidents of sexual assaults or sexual abuse in their past. Such incidents tend to make them traumatized, which violate their self-confidence and the will to trust, leading to genophobia. Another cause could be physical conditions or medical reasons related to this. Here are some of the main reasons why people suffer from genophobia:

Also known as rape, it is one of the main reasons why people tend to fear the idea of sexual intimacy with another person. The unlawful act of sexual intercourse when forced onto a person by someone without their consent could lead to the phobia. The act does not necessarily have to involve penetration to induce fear in the person. The victims of rape can be of any gender and the fact that they are attacked in a shameful manner develops the fear in them. The stress and trauma a rape victim goes through after the incident needs special care and treatment as they might need physical and mental healing. During the incident, the victim can suffer from severe bruising, soreness, genital infections, rectal bleeding, etc. and this might lead to psychological disorders with the fear that it might reoccur to them.

Children often get molested or sexually abused by an adult or adolescent individual for their perverted sense of sexual satisfaction. A child might also be sexually abusive to another, like showing of pornographic tapes to a child, exposing the genitals of a child or forcing a child to involve himself/herself in some sexual activity. Most of the times, in the case of child molestation, the victim is forced because of their lack of awareness on the subject. But when they start developing ideas about the subject, they often relate to the past experiences they went through, which could lower their self-esteem and they may feel violated at a younger age. Such victims often suffer long-term psychological traumas which need a lot of treatment and care. The lack of trust on the person makes them fearful about having sexual intercourse with anybody in the future.

People might become a victim of the fear because of their insecurities like body image issues or obsessing over certain abnormalities in their bodies. The issue could be just about the whole appearance of the person which might make him/her feel insecure and shameful about or it could be focused on a particular cause like women who dislike their labia minora or labia majora could be affected by genophobia, like men who suffer from erectile dysfunction, could too. Other physical reasons could develop the psychological fear in them too.

Most of the symptoms of genophobia are quite similar to that of other phobias. They include:

The symptoms cannot be controlled and are caused by the over-thinking about the fear and taking extreme measures to avoid the fearful situation or object. These victims try to avoid these situations which result in the phobia instead of solving the issue.

How to Cope with Genophobia?

There is no easy way that you can use to get rid of the phobia in a day. A lot of dedication and effort is necessary to help you in coping with genophobia. You might not even get over it completely, but it can definitely be managed and you can have a healthy sex life as well. Here are some steps to help you cope with genophobia.

As mentioned above, there are different reasons why this fear occurs in different individuals. Look for the reason that is causing the fear of sexual intimacy in you. It could be some past experience that you must try to recall or ask your parents and family members about it. It could be your insecurities or lack of self-confidence too. Figure out the cause to manage your symptoms effectively.

Deal with the insecurities:

You might just find out that the cause for your genophobia is your insecurities. Try to work on them by improving yourself where you are weak and insecure about. Feel positive about yourself no matter how different you are from others. Motivate yourself to achieve your goals and overcome the insecurities which could be losing weight, improving your appearance, and more. There could be certain issues which cannot be controlled; under such circumstances, surround yourself with positive people who would motivate you as you share your issues with them.

Try to trust on your partner:

Your genophobia could be due to some past trauma which has left you suspicious about other people in your life and caused the phobia too. Take your time and try to understand the positive things your partner does for you. Try to trust your partner and talk to him/her about your past experience. This could be risking a relationship, but with the right person, it can save you.

Do not look at therapy as a taboo. Be vocal about your issues and try to get help from a psychiatrist or a professional therapist to help you overcome this fear. You can also start by taking advice, motivational and positive thoughts, etc. from your friends and family. When close ones fail to advise you good enough to cure your phobia, do not hesitate to take the help of a trained person in this field.

There are different kinds of treatments offered for victims of genophobia. You might feel embarrassed and ashamed of your phobia which can make you really lonely and frustrated. Do not worry; you will definitely have people around you who you could share your feelings with and even if you cannot trust anybody, you can rely on trained professionals whose job is to listen to your issue and help you get through the situation. The main loss that people suffering from this situation face is the loss of control over their emotions, thoughts, anxiety and much more which has to be restrained to help the person overcome this fear.

Therapists often recommend behavioral therapy, which is used for treating phobias. The process includes exposing you to the fear and might involve your partner with whom you have to discuss your issue and work through your thought process. There are other methods too, like acupuncture, which help to ease the pain by distracting the mind from the issue and focusing on other things. You can choose whichever method you wish to after consulting with your doctor. You need to face the fear instead of running away from it.

When Should You See a Doctor?

You must understand the build-up of your fear. A mild fear is different from a phobia which affects the lifestyle and choices of a person. It affects the person mentally and the fear is constant and severe, which can even affect romantic relationships. When you understand the difference and recognize your phobia, you must prepare yourself to see a doctor. Phobias can be treated with therapies and medication that could vary from one situation to another. Your doctor will help you to cope with the symptoms and also overcome the fear.

People should be aware of the condition and that there is no shame in it. The fear of sexual intimacy is just like any other phobia and must be accepted in the society like all other phobias. If you are suffering from the condition, do not hesitate to ask for help even though it might be difficult for you. With proper treatment at the right time, you can lead a healthy and normal lifestyle in a very short span of time. Individuals ashamed of visiting a therapist for their issue must know that all the professional therapists and psychiatrists are strictly governed by the privacy laws and any detail of your case will not be shared with others. Face the situation with courage and overcome it with professional help, if you need it.