Lexapro is the brand name for escitalopram. It is an SSRI or a selective serotonin reuptake inhibitor drug that is usually prescribed for treating anxiety disorder and depression. The drug helps to increase the level of serotonin, one of the neurotransmitters that help in maintaining the mental balance. Lexapro is popularly used and easily available in medical stores. One of the reasons for the popularity of the drug is that it can be used by people of all ages, even children as young as 12 years can use the drug without any serious threats.

Lexapro can be helpful for a number of things including a lack of concentration, fatigue, loss of interest in carrying out certain tasks, depression and feelings of worthlessness and guilt. It is also very effective in treating all the major symptoms of anxiety disorder such as irritability, restlessness, and lack of concentration. Lexapro is also used in the treatment of social disorder, anxiety disorder, obsessive compulsive disorder and panic disorder.

The drug is produced by the Forest Laboratories and Lundbeck in collaboration and was approved by the FDA or the Food and Drugs Association in the year 2002. Due to its effectiveness in treating a large number of issues that can have a direct impact on the lifestyle, Lexapro is also referred to as an example for lifecycle management. 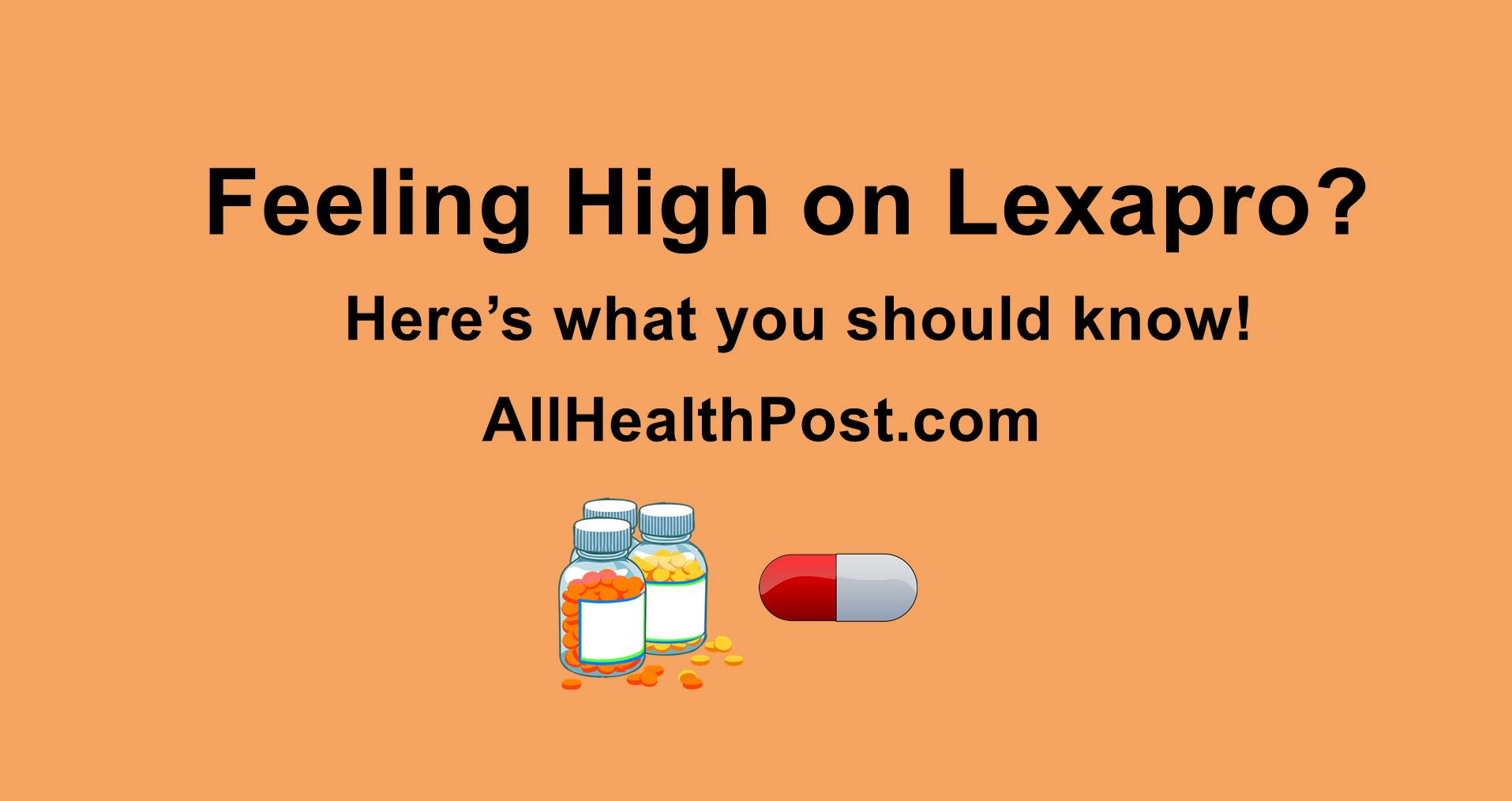 Although Lexapro is supposed to be non-addictive, people who have been using it for a sufficiently long period of time are very likely to develop a psychological addiction and also have occasional feelings of being high on the drug. In such cases, the patients may start taking the drugs in dosages higher than recommended, thereby leading to a heavy dependency on the drug.

Since Lexapro can be so effective in keeping various mental illnesses at bay, many people tend to develop a very high dependency on the drug. When the drug is not available, the person may start suffering both the social as well as psychological side effects such as fatigue, insomnia, nausea, dizziness and so on. The patients may develop guilty and depressive feelings when the drug has not been administered. Not only that, many people can get high on Lexapro which means that they may also develop several physical symptoms of withdrawal if the drug is not administered. If it gets serious, Lexapro addiction can lead to reclusive behavior, decreased personal activity, damaged relationships and financial instability.

Why Does Lexapro Cause High?

Lexapro is a selective serotonin reuptake inhibitor. Its only job is to promote the levels of serotonin in the brain and is claimed to be physically non-addictive. However, if used for a sufficiently long period of time at high doses, it can easily cause a High Addiction. More than often, people with Lexapro High are the patients who have been using the drug for enhancing mood or those who have been trying to get high by using the drug in very high doses.

Lexapro Withdrawal and its Symptoms

Although Lexapro is not habit forming, patients who have been on Lexapro are bound to experience physical symptoms of withdrawal. Moreover, since they can no longer get high on Lexapro, the situation worsens. Together with this, they may also develop negative psychological reactions. Many patients have complained of repeated sensations of electric shock in the brain upon stopping the intake of Lexapro. The most common symptoms include confused thoughts, depression, irritability, sexual dysfunction, dizziness, insomnia, headaches, nausea, and moodiness.

Patients showing the above symptoms should constantly be monitored. Due to the risk involved, it would be more advisable to lower the dose in a more gradual manner instead of making abrupt discontinuations. If the symptoms do not go away, it can be helped to some degree by going back to the initial dosage and decreasing the dosage more gradually than before.

Side Effects of Lexapro

Studies that compared Lexapro to other drugs such as venlafaxine and paroxetine revealed that Lexapro might actually have lesser side effects than these other drugs. However, many people have reported moderate to mild side effects upon the administration of Lexapro. In a large number of cases, the side effects are seen within a few weeks of taking the drug. The most common type of side effects includes sexual problems, fatigue, sleep disorders, dry mouth, nausea, and sweating.

It should be noted that sexual problems are common occurrences during the use of antidepressants. Similar is the case with Lexapro. Patients may experience issues such as female anorgasmia, decreased libido, and ejaculatory dysfunction. Patients who notice any signs of sexual problems while on a Lexapro course are advised to immediately bring the issue to the attention of a doctor. If the problem worsens, consultations should be made regarding alternative forms of treatment. Abrupt withdrawal from the medicine can give rise to various symptoms. Therefore, it should only be done after consulting a doctor.

Some of the Common Side Effects of Lexapro Include

Using very high doses of Lexapro can give rise to the following symptoms.

If these side effects are seen, an ambulance or poison control should be called in right away.

Since Lexapro addiction has not been studied sufficiently, there is very little information regarding the treatment. Currently, there is not enough evidence in support of the mechanism for addiction. However, it there is an addiction, the best way to overcome it is by stopping the drug use. This should be done under close supervision of the doctor or a Lexapro treatment center. It is very important for people opting for treatment to Lexapro addiction to find a strong support team. This can be acquired through close friends, Lexapro rehabs, and professional therapists. Help is always available, and patients should not shy away from asking for it. This is essential for a healthy recovery from Lexapro addiction.

Lexapro should be taken once each day, either in the morning or in the evening. It can be taken with or without food. Given below are the recommended dosages for different health issues.

Adolescents suffering from major depressive disorder are advised to take Lexapro at a dose of 10 mg per day. Patients may also try a flexible dose of 10 to 20 mg per day to check the efficacy of the drug. However, it should be noted that people taking 20 mg each day should only try it after at least three weeks of using the drug.

Adults with major depressive disorder are advised to take 10 mg of Lexapro each day. Effectiveness can be seen both at a dose of 10 mg as well as 20 mg. However, no greater benefits are seen at 20 mg than at 10 mg. Patients switching over to a daily dose of 20 g should only try it out after two weeks of using the drug.

People with acute major depressive disorder are required to continue the drug for several months following the acute episode. Many patients have shown significant positive benefits upon continuing a dosage of 10 to 20 mg for a period of about eight weeks. Patients are required to go for regular reassessments during the maintenance period.

Adults with generalized anxiety disorder can take 10 gm of Lexapro on a daily basis. Patients increasing the dose to 20 mg should do so only after taking the medicine for a period of at least one week.

Generalized anxiety disorder, being a chronic condition, requires a prolonged treatment. Significant improvements are seen upon taking the drug for a period of 8 weeks. However, the benefits for continuing the drug beyond this period have not been studied in a systematical way. The evaluations are also likely to differ from one patient to the other.

SSRI medications have been associated with a high risk for suicides. The risk is higher in case of young adults, adolescents, and children. Therefore, anyone who has been taken off the drug should be closely monitored, especially during the initial phase of the therapy. Patients are recommended to visit their therapists or physicians at least once a week. Staying in constant touch with supportive friends and family can also be equally helpful. Counseling should be given if the patient seems to display self-harming behavior. Doctors should be immediately notified if the patients display any of the following things:

Lexapro has not been tested in lactating or pregnant women. However, the drug has a tendency to cross the placental barrier, thereby getting excreted to the breast milk. This is also a common thing with other SSRI medications. It can lead to heart defects, pulmonary hypertension and birth defects in the newborn. These babies also develop serotonin syndrome and SSRI withdrawals. Hence, it is best for pregnant women to stay away from Lexapro or any other SSRI.

This is a toxic syndrome that develops with the overdose of Lexapro and other SSRIs. However, it is more common when the SSRI drugs are administered together with serotoninergic medications. The patients can develop mild to moderate symptoms in response. The symptoms include:

Serotonin syndrome appears very fast, that is within hours of administering the serotonergic drug. Using alternative therapies, recreational drugs and over the counter medications without a prescription can also give rise to serotonin syndrome. The symptoms are very similar to NMS or neuroleptic malignant syndrome and may even be difficult to differentiate one from the other. Hence, caution should be taken during the use of Lexapro.

It should be noted that MAOI drugs used in the treatment of depression have a serotoninergic effect and can give rise to complications if taken together with Lexapro. Both these drugs remain in the plasma for a long time after you have stopped taking them. Therefore, there has to be a gap of a minimum of two weeks before switching between the two medications so as to make sure that the former drug has been completely removed from the body before opting for the latter.

Higher doses are mostly recommended when the normal doses stop showing effect. In some cases, doctors may also recommend secondary medications in addition to the original dosage. Lexapro can save the patients from having to take up the expenses for high-cost prescription drugs. The main reason for the effectiveness of Lexapro is due to its ability to perform as an SSRI or a selective serotonin reuptake inhibitor. Serotonin is responsible for controlling a number of activities in the body including appetite, sleep patterns, pain tolerance, and perception. Lexapro helps the body to restore balance. Hence, the patients experience a balanced mood and are able to live life to the fullest. Depression, apprehensions, and fear remain a thing of the past.

Lexapro is usually prescribed for long-term treatments. However, patients with other health conditions should stay under the close supervision of the doctor while taking medicine. Negative symptoms can be seen both with an overdose as well when the doses are missed. If the patients do not notice any change in the health condition even after several weeks of taking the drug, it is an indication that the drug may not be working. Sometimes, it can take up to 2 months for the drug to show effect. Therefore, the patients should stay under close clinical monitoring while using Lexapro. However, if the drug is causing a feeling of high even after a week of continued administration, it is best to consult a doctor for an alternative treatment technique. The prescriptions for this drug are refillable. It should be kept away from high temperature and damp. It is best not to store this medicine in bathroom cabinets.

Other Medication Side Effects