What is the Ligament of Treitz?

The ligament of Treitz is the non-striated muscle which is attached through connective tissues to the diaphragm, just adjacent to the oesophageal opening. The ligament of Treitz is made out of fibromuscular bands of the smooth muscle. It is very thin and therefore cannot be seen in the CT imaging. However, it lies at the spot where the jejunum begins. 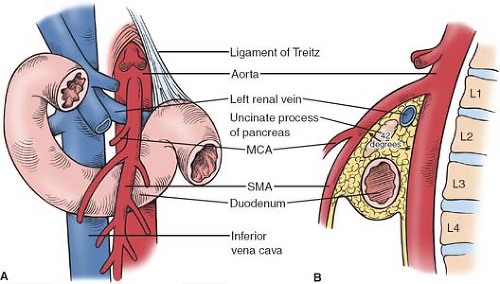 The ligament of Treitz forms a mark that separates the first part of the small intestine from the second. It also serves as a mark for differentiating the lower and the upper part of the gastrointestinal tracts, which has special relevance in clinical medicine. Often, it also helps in identifying the exact source of intestinal bleeding. The ligament of Treitz also has a role in the gut rotation as it offers the point of fixation. It also helps with the process of digestion, by creating a wide angle at the duodenojejunal flexure.

The Importance of the Ligament of Treitz

The Duodenojejunal junction is supported by a thin muscle that serves as an attachment to the suspensory muscle of the duodenum. The angle of flexure increases as this suspensory muscle contracts, thereby enhancing the movement of the contents within the intestinal tract.

Origin of the ligament of Treitz

It is a layer of muscle that emerges from the respiratory diaphragm through its right esophageal crus. It also includes the ligamentous and the muscular fibers that emerge from the superior mesenteric artery and the celiac trunk. The muscle is voluntary in nature and is created by a tendon that has two muscular ends, each with a different function and embryological genesis. Therefore, the ligament of Treitz has quite an uncommon structure. The lower part of the muscle may be constant with the rounded as well as the longitudinal layer of muscle lying towards the duodenojejunal junction.

Structure of the Ligament of Treitz

The muscle comprising the ligament of Treitz is a non-striated muscle. It is connected to the diaphragm through the connective tissues that lie around the left crus of the diaphragm and the celiac artery. It finally ends in the duodenojejunal flexure and the distal duodenum.

Anatomic Variations of the Ligament of Treitz

The ligament of Treitz has many anatomic variations with respect to the point of attachment as well as the length. It does not always stick to its classical description when it comes to the anatomy. The muscle has been known to be attached to the duodenojejunal flexure in only about 8 percent of the people. In about 40 to 60 percent of the cases, the muscle is attached to the third and fourth duodenum part in addition to the duodenojejunal flexure and in about 20 to 30 percent of the cases, it is only attached to the duodenum to its third and fourth parts. Although there are multiple other separate attachments for the ligament of Treitz, they are not very common.

Functions of the Ligament of Treitz

The ligament of Treitz is derived from the mesoderm and is especially important for the small intestine. It acts as a superior retention band, allowing for an embryological rotation. A contraction of the ligament of Treitz allows for an expansion in the angle of duodenojejunal flexure, thereby facilitating the movement of contents within the intestine.

Clinical Importance of the Ligament of Treitz

It is important for the radiological diagnosis of malrotation of the intestinal tract or an incomplete rotation altogether. Whenever there is gastrointestinal bleeding, the ligament of Treitz helps in determining whether the bleeding has been occurring in the upper or the lower part of the intestine. If the ligament of Treitz is short in length, it leads to the congenital superior mesenteric artery syndrome.

The ligament of Treitz holds an important significance in terms of anatomy. It not only helps in distinguishing the area of bleeding but also helps in identifying malrotation during cases of recurrent vomiting. Whenever there has been malrotation, it is clearly seen in the radiological images.

The Whipple’s procedure, which is popularly used for the treatment of pancreatic cancer, requires removal of the duodenum, pancreas and a part of the jejunum. In such cases, the ligament of Treitz is separated and preserved so that the remaining part of the intestine or the jejunum can be passed through it when it is linked to the pylorus in the stomach.

The ligament of Treitz may also have a contribution in the presentation of the superior mesenteric artery syndrome or SMAS. This is a life-threatening condition but extremely rare. SMAS can be of two types – acute and induced or chronic and congenital. It is a result of the duodenum getting compressed between the superior mesenteric artery and the abdominal aorta. If it is congenital, it may also be caused by a short suspensory muscle. One of the treatments for this condition is the Strong’s operation and requires the separation of the suspensory muscle by cutting it. Most often, the ligament is entirely absent or involuted in the adults which makes it difficult to determine its location via imaging.

Intestinal Malrotation and the Ligament of Treitz

Whenever a patient suffers from intestinal malrotation, it ends up in bilious vomiting, abdominal distention, abdominal cramps and blood in stool and mucus. If the patients have chronic malrotation that has remained uncorrected for a long amount of time, it can lead to pain and vomiting on a recurrent basis. The complications that can arise from untreated intestinal malrotation include internal herniation, chronic duodenal obstruction, acute midgut volvulus, acute duodenal obstruction, chronic midgut volvulus and superior mesenteric artery syndrome. Although the exact causes of intestinal rotation are not known, it is seen to be recurrent in some families and therefore through to have a genetic association.

Diagnosis and Treatment of Intestinal Malrotation

Intestinal malrotation is mostly diagnosed through a laparotomy. Plain radiology may also show signs of obstruction in the duodenum or dilation in the stomach and the proximal duodenum. It is mainly the upper gastrointestinal portions that show abnormality during the condition. Often, the ligament of Treitz acquires the appearance of a corkscrew and lead to an obstruction. The treatment for intestinal rotation is possible and usually involves surgical procedures. The patients are resuscitated with fluids to stabilize them before the surgery. The fibrous bands over the duodenum are cut off, and the mesenteric pedicle is widened by separating the cecum and the duodenum. Most of the times, the appendix is removed prior to the surgical procedure for correcting intestinal malrotation.

SMAS and Ligament of Treitz

Superior Mesenteric Artery Syndrome or the SMAS is a very rare condition resulting when a portion of the duodenum is compressed by the superior mesenteric artery or any one of its branches. Its occurrence is even less than 0.5%. The condition is seen to be more common among women, people between the age of 10 and 40 and those who are either underweight or experiencing a rapid loss of weight. People suffering from SMAS often complain of epigastric pain, postprandial fullness, and early satiety. Some relief is experienced while sitting on a knee to chest position.

Options used for imaging include CT scans, upper GI series, SMA angiography, fluoroscopy and more. The results could be dilation of stomach and portions of the duodenum, decompression of the duodenum, and abnormal aortomesenteric angles. The initial treatment for SMAS does not involve any surgery and simply puts emphasis on proper nutrition and procedures for repleting the retroperitoneal fat pad. The patients are recommended to switch to high calorie pureed meals at frequent intervals. It may also involve nasojejunal feeding through a tube and sometimes parenteral nutrition. If the symptoms persist even after the initial treatment, surgical procedures are used. Most common procedures are

The ligament of Treitz is responsible for suspending the distal duodenum. However, due to their thinness, they are not usually identified over CT scans. A large amount of extrinsic mass may lead to a displacement of the duodenum, and the ligament of Treitz cannot keep this from happening. The ligament has a vital role in the rotation of the stomach and also in the identification of certain gastrointestinal anomalies. The size, the strength as well as the positioning of the ligament of Treitz may vary from person to person.